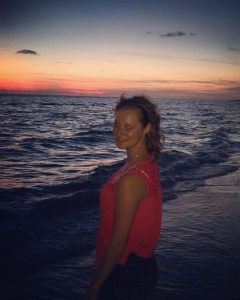 This is the letter that Abby wished she had received when she was in the hospital with Acute Lymphoblastic Leukemia. She is a 2017 Andre Sobel Award Honorable Mention Winner.

Abby’s mother, Amy, also submitted a letter that she wish she had received when Abby was diagnosed. She hopes it helps other parents as they begin their journey.  You can read Amy’s letter here.

I know you are absolutely scared out of your mind right now. I know because I too was scared out of my mind. You are probably thinking, “Am I going to die?” I asked my parents and my doctors the same thing. I did not know. I’m sure if you think about it, you don’t even know anyone with cancer. I didn’t. I thought that only older people got cancer. Or you see little kids with bald heads on the St Jude’s commercials, but you think that only happens to kids far away and in different states. It doesn’t happen to kids around here. It’s so rare. I’m sure you never thought it would ever happen to you. None of us do.

I want you to know this early on because I didn’t hear it from someone and I want you to know upfront. You WILL GET THROUGH this. You will. I know everyone has to die at some point in their lives and yes some kids do die from cancer, but chances are you will not be one of them.

I believed for the first six months that I was just going to die. I believed it with all my heart, but the fact of the matter is: most kids with cancer will live long, happy lives!

I wish I had known early on in my treatment that there are other 15 year old teenage girls going through cancer, just like me. There are other teenage boys and girls who are fighting just like you– who are in the hospital, miserable and sick. You are not alone. I remember having a nurse tell me that she had leukemia when she was ten years old. She was the first survivor I met with cancer. She was a breathing, talking, professional nurse, married with two healthy children. I thought to myself that maybe, just maybe one day that could be me too.

Let’s talk about the hair loss. I know that’s looming on your mind right now. I’ll be honest with you… it’s hard. There’s really no way around it. It is really hard. I had long, beautiful curly hair and yes, it all fell out, but I do remember a funny thing that happened that I hope will make you laugh. My hair was starting to fall out in big chunks, so bad that it was falling in my mouth and in my food. My mom was in the kitchen and I was sitting in the living room. I yelled out to her that my hair kept falling out and I asked her what I should do with it. She was cooking dinner at the time and said for me to just throw it on the floor. A couple of minutes later, my mom walks over to a huge, I mean huge, pile of my hair on the ground. We laughed about it, because if you don’t laugh, you’ll cry. But crying is alright as well. You may want to try wigs. I tried one and only wore it a few times. Honestly, you will probably feel better just going bald, especially if it’s in the summer time. Those wigs are really itchy. Put lots of makeup on because you will be gorgeous walking around with your beautiful bald head.

Be prepared for people to stare. They will. They can’t help it. They’ve never seen a beautiful, bald teenage girl. I remember the stares my mom and I got as we went shopping for a dress for homecoming. They usually don’t see mothers pushing their bald daughters in a wheelchair around the mall wearing a mask. But don’t worry about it. You are beautiful. Go shopping. Go get your nails and makeup done. Go to the movies. Go out. People will stare. Let them stare and tell them like it is, “I have cancer.” It will shock many people, but it will also bring about awareness for this terrible disease.

I know you are missing out on every social event right now. Every sports game you used to play or every music performance you used to be in. I promise you, it may seem like forever, but you will get back to it. It may take some time, maybe even years, but you will return to it. Or maybe you will realize that you don’t want to return to your same activities, and that is alright as well. Because you will change.

I do wish someone would have told how alone I would feel. I had friends who said they would be there. Some were, but others weren’t. You will lose friends, but you will also gain some pretty awesome ones as well. There are many people within the cancer world that will reach out to you. They know exactly how you feel and they will end up being some of your closest confidants. Your family will end up being some of your best friends. Your friends don’t mean to, but they will forget to invite you, because you are not at school when everyone else is talking about plans. You will lose friends. It just happens. Not necessarily because they change, but it’s because you will change.

Cancer does change you. It really will. You become more mature than your friends or classmates. You will realize that all the petty drama exhausts you because it all pales in comparison to what you’ve already been through.