Burke wants others to know that realistic pessimism wasn’t a bad thing for him. When diagnosed with brain cancer, the last thing he wanted was anything sugar-coated. Here is the letter he wish he had received, along with the poem “Invictus” that got him through tough times.

I’m not going to tell you that you’re going to be okay.  I’m not going to tell you that things will turn out all right.  In all possibility they won’t.  I want to let you know that you can get through this. Either way.  Whether you live or die, it will be okay.  If you are strong, if you work hard, if you persevere, then maybe, just maybe you will make it through. Not unscathed. Not undamaged. But you will persevere.  You will emerge. And whether you emerge here or in the next life, it’s the effort that matters.

It will be hard. Maybe the hardest thing you’ll ever have to do. Life has never been easy or fair. And it isn’t going to start now. Dealing with this and living with this is going to seem impossible at times.  I don’t know if you can work through this.  Every day you’ll get up and think, “why did this happen to me? Why did it have to be me?” Well, let me tell you something. It doesn’t matter.  What matters is that it was you. It did happen. Now you have to deal with it.

Life isn’t measured by length. It’s what you do in the time that you have that matters, and that you try your damnedest.

I am enclosing with this letter the poem “Invictus” by William Ernest Henley. Mr. Henley was in the hospital for about two years with horrible tuberculosis that took one leg and threatened to take the other.  Most doctors gave him no hope, and told him he’d never walk again. He tried an experimental treatment that he knew might not work, but he wanted to walk again- to try. He recovered and was able to walk again. But would the poem matter less if he never walked? I don’t think so. What mattered is that he tried. He wrote Invictus while in the hospital.

Invictus means “unconquered” in Latin.  He said, “I am the captain of my fate, I am the master of my soul.”  I want you to remember those words and carry them with you for the rest of your life.

Those few words will sum up your journey succinctly. This trial is only one of many that you will face. It may not even be the hardest one, but it is going to be difficult. Remember this line from the poem, too: “My head is bloody, but unbowed.” I cannot be there. I cannot visit you. Just know that I’m thinking of you. I’m hoping that you recover enough to come and see me.  I remain your friend, always.

Out of the night that covers me,
Black as the pit from pole to pole,
I thank whatever gods may be
For my unconquerable soul.

In the fell clutch of circumstance
I have not winced nor cried aloud.
Under the bludgeonings of chance
My head is bloody, but unbowed.

Beyond this place of wrath and tears
Looms but the Horror of the shade,
And yet the menace of the years
Finds, and shall find me, unafraid.

It matters not how strait the gate,
How charged with punishments the scroll,
I am the master of my fate:
I am the captain of my soul. 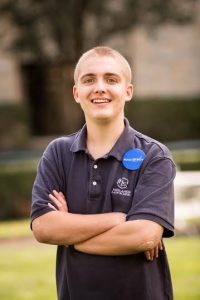 A message from Burke:

I was a straight A student in 8th grade, with a B in Greek that I was trying to bring up. I was a cross country runner, an artist, and I loved improv, math, Latin, biology, history and politics. I had some headaches, that were sometimes making me sick to my stomach, but really, life was good.  The headaches were probably migraines. I thought I was a comedian and made lots of jokes in school. My best friend was someone I had known forever, since kindergarten. I also had a great friend one year older, a girl, who I really confided in.  I had a crush on her. I also had a new friend, and we started 8th grade together as the new kids at a new school, and two other good friends from childhood.  My headaches turned out to be a rare brain tumor. Ependymoma. I had to be admitted to the hospital emergency room on November 14, 2011 when they found the tumor, because it was as big as a baseball.  They didn’t know how I was up and moving around, let alone running cross country.

They told me that I’d be in the hospital for about two weeks.  After surgery, I didn’t walk again for four years. Everything that could go wrong, did. I was in a coma or couldn’t move, speak or eat for months, and was in the hospital for ten and half months.  Friendship is different for guys. We don’t talk sometimes, we do things together. But what happens when you can’t do anything? Literally, nothing. I couldn’t communicate or even move a finger. What happens to friendships then? I was really fortunate compared to some kids I saw in the hospital.  Most of my friends kept visiting me.  But my best friend visited me only once.  I later learned that seeing me like that was really tough for him.  My friend that was a girl was really loyal.  She visited me once a week.  She’d talk to me even when I couldn’t talk.  She’s the person that gave me the poem, Invictus. We saw each other when I got out of the hospital too.  But then, suddenly, I don’t know why, she couldn’t see me anymore. It may have not had anything to do with me. I just don’t know. Other friendships grew. My friend that I just met in 8th grade kept coming to see me. He’s been there for me through everything.